“I ain’t LDS, and I ain’t gonna be LDS:” Famous last words

This experience relates to three principles:  setting goals and deadlines to your work, creating conversations about the gospel, specifically what they’re interested in isn’t what we’re interested in, and finally sharing the Gospel at work.

While I was on my mission  Elder Ballard suggested setting a date once a quarter, so that’s what I’ve been doing. I live in Provo, Utah and go to BYU—so the stigma is that everyone is a member of the Church and there is no chance of finding investigators for the missionaries to teach but I am a firm believer that there are people all around us.  In January I set a date for March 31 and was earnestly praying that I would be able to find someone for the missionaries to teach.

By the end of January I received a promotion in the call center where I work and had to take a one week training class.  In my first training the company made it perfectly clear that our call center wasn’t the place to talk about religion.  I’d say a good portion of the people I work with are not members (compared with other places I’ve worked) and I have had the conversational paradox framed by Satan multiple times—that I shouldn’t “talk to anyone about the gospel at work. For sixty hours each week (five days times twelve hours, including commuting), you are putting missionary work out of bounds. Right? The problem then is that on Saturday I’m supposed to spend that time with my family, and they are all Mormons. And on Sunday I spend my time with my family and at church, where everybody is a Mormon. So what you’re saying to me is that except for those seven days every week, I can share the gospel with others. Do I have it right?”

Well, the class started on a Monday.  I sat next to a girl named Lizbeth.  She was born in Puerto Rico and is of Latina and African descent and was full of straight sass.  As the day progressed her language just became more and more crass—it was clearly evident that she knew more swear words in English than any other kind of word.  At every lull in class she would mention another aspect of her lifestyle—partying on the weekends, getting drunk, coming home and crashing.  During breaks in the training class she couldn’t get out the door fast enough to smoke a cigarette.

In the afternoon, we all listened in to another call representative taking live calls to see the troubleshooting that we had learned in action.  There were a few minutes of availability in-between calls where we would talk. There was a group of six of us: me, Lizbeth, and four other members of the Church.  We began talking about going to college, she mentioned that she wanted to go to school eventually.  As we were all talking, I mentioned I went to BYU—”Oh hell no!  I ain’t LDS,” She interrupted, “and I ain’t gonna be LDS!”  When she said that something inside me stirred.

She asked  a few questions about the Honor Code, including that you have to be active in a faith, abstain from drugs, alcohol, tobacco, tea, coffee, premarital sexual relations.  Being a single working mom we also talked about the BYU-I Pathways program and she re-emphasized that she goes clubbing on the weekends.

The next day I went to class and I had no expectations of having a further gospel conversation with Lizbeth; she made it clear that she wasn’t going to be LDS.  I sat down in the same spot next to her, and she started telling me about her kids, and when she started talking about her young son, who’s 7, I felt something inside me stir again.  I remembered the study among converts about what had initially interested them in the Church and that the three main reasons were:

After she finished telling me a story about her son and she had brought up the Church in some way, I interjected:  “You know I love being a member of the Church because I feel close to God.  I feel like I have a purpose, and above all I feel a profound sense of happiness and peace—But that’s what we’re all looking for, isn’t it.”

I continued, “Let me tell you about the kind of peace and sense of purpose being a member of the Church brings me.  When I was a young man the ward that I grew up in included a group of condominiums where a lot of elderly widowed old ladies lived.  Whenever it snowed all the young men from 12-18 in our ward would wake up at 5:00 AM and go out early in the morning before School to shovel the snow from the driveways and sidewalks of these little old ladies.  We would shovel for about an hour and in that time we would shovel the walks of 68 homes.  It was cold and it hurt your back, but it was warming to the heart.  I loved starting my day like that, we’d go home and shower and barely make it in time for the school bus.  One day at about 5:30 we were shoveling the sidewalks around a cul-de-sac, when we reached Sister Chapman’s home.  I started shoveling the driveway and her garage door opened.”  With tears in my eyes, I continued,  “There on that cold early morning  stood Sister Chapman, cane in hand, slightly hunched over with dozens of homemade bran muffins with apple and orange juice sitting on the trunk of her car.  She had woken up hours before to begin baking so she could serve us breakfast.  She said, ‘thank you, boys, you have no idea how much it means to us little old ladies to have you come and do this for us.’ I walked up, unzipped my coat and gave this sweet angel a great big hug.  She told us to send as many of the Aaronic priesthood holders and leaders as were willing and had time by her garage so that she could thank them personally.”

“You see that’s what being LDS is all about.  And you know that warm fuzzy feeling in your heart right now?  That’s the feeling I have in my heart all the time—that’s the closeness with God I’m talking about.”

A coworker turned around and asked me, “Are you doing missionary work right now?”

“Yes, I am.”  He turned away and I felt proud that I was sharing the Gospel at work.

I knew that I had another three days sitting next to her in class so the next day, Wednesday, I came with the Book of Mormon downloaded in Spanish on my iPad.  She sat down after her first cigarette and I said, “hey, want to read one of my favorite scriptures?”  I handed her Alma 7 and had her read how the Savior would take upon Him our infirmities.

“Oh, I’ve always loved that Scripture!  Where is it in the Bible again?”

“It’s in the book of Alma, in the Book of Mormon.”

I then had her read 3 Nephi 11 and when she came to the part where Christ invited them all to touch the prints of the nails in His hands and feet, she said, “Oh man, I feel REALLY weird right now.”

“Is it a good or bad feeling?”

I told took my iPad and had her read 3 Nephi 17.  Finally there were two returned Spanish Speaking missionaries that joined in on the conversation.  We talked about the Church and she asked the question, so is there a church near where I live.  We all laughed and said we’re in Utah of course there is! Then I felt prompted to say, “Lizbeth, my wife and I would love to go with you to the Spanish Ward where you live on Sunday.”

“But you don’t speak Spanish, does she?”

“No, neither of us do, but the Gospel is the same in Spanish as it is in English.”

We gave her the address and time.  On Sunday we all met in the Chapel and sat together.  The sister missionaries walked in before she came in and I told them exactly what happened. She stayed for Sacrament Meeting and Sunday School.

On Saturday, 12 days after she said she “ain’t LDS, and ain’t gonna be LDS,” I got this text message with English as a second language perfectly visible:

“Hey!  First of all tell your wife I said hey, give your gorgeous daughter a kiss from me.  Now, I’m updating you on how things with church have been going.  The sisters (missionary) been here (my apartment) 3 times since Sunday.  I really have enjoyed it.  I don’t know if you remember the guy that start talking in church Sunday(bishop something, I don’t know how it’s call) well he is my neighbor.  I talked to his wife yesterday, since she is a women (adult) she answer my family questions.  Tomorrow the sisters (missionary) are coming again and my neighbor it’s going to bless me (put oil in my head) and bless my home.  Now, im planning on getting baptise (however you spell that) and my friend told me it haves to be a man, she can’t do it.  So… I was wondering if you are willing to do it? Since you was the person that basically introduce me to the mormon church.  I don’t know when.  I will be getting baptise since I still smoke.  But that’s stopping as soon as I’m done with this box, which it will be by Monday.  So I assume it should be sometime around March That’s a long text… Sorry!!”

Lizbeth had a hard time going cold turkey off coffee and tobacco, but she did it.  The circle of coworkers that helped explain everything fasted for her so that she could have strength from heaven. 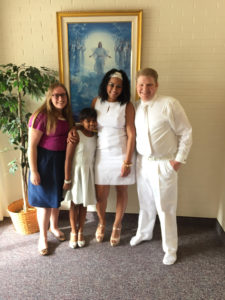 On March 10, 2017 I stood in a baptismal font in Orem with my arm to the square and baptized Lizbeth and her 10 year old daughter, Adrianna.  On March 29, the group from work, my wife and I went with Lizbeth and her boyfriend (that she met on an LDS online dating website) and did baptisms for the dead at the Provo City Center Temple.  She was baptized for her Grandmother, and her deceased sister, for whom I had helped her do the family history research and is in the process of getting her patriarchal blessing.

Best stories, Creating conversations aobut the gospel, Setting goals and deadlines to your work, Sharing the Gospel at Work, What they're interested in isn't what we're interested in

One Response so far.