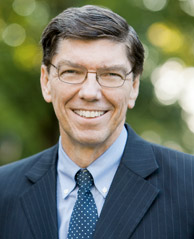 Clayton M. Christensen has spent a large portion of his life working to build the kingdom of God through missionary work. He and his wife, Christine, found the work to be uncomfortable and intimidating at the outset, which he recognizes in retrospect was because they were following many of the thoughts and ways of man. Learning and following the principles summarized in Everyday Missionaries helped them share the gospel in ways that have become natural and energizing because, they believe, the principles more completely represent God’s ways in doing missionary work. They hope the principles will help you too.

Clayton Christensen’s missionary experiences span his service as a full-time missionary for The Church of Jesus Christ of Latter-day Saints in the Republic of Korea from 1971 to 1973, through serving as an Area Authority Seventy in the North America Northeast Area of the LDS Church from 2002 to 2009, and on to today.

In his professional life, Christensen is the Kim B. Clark Professor of Business Administration at the Harvard Business School. He holds a B.A. in economics from Brigham Young University; an M.Phil. in economics from Oxford University, where he studied as a Rhodes Scholar; and M.B.A. and D.B.A. degrees from the Harvard Business School. His publications on the management of technological innovation have received numerous academic awards, including the Global Business Book Award. He was a White House Fellow during the administration of U.S. President Ronald Reagan.

He also served the Boy Scouts of America for 25 years as a scoutmaster, cubmaster, den leader, troop and pack committee chairman.

He and his wife, Christine, are co-authors of “Seven Lessons on Sharing the Gospel,” which was published in the Ensign in February 2005. They live in Belmont, Massachusetts and are the parents of five children and grandparents to five grandchildren.