Round and round we go … 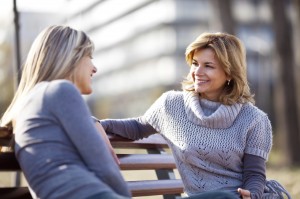 I have an experience about going in circles about doctrine — what can I do now?

I have a friend with whom I often discuss religion, and when I told her I was joining the LDS Church, she said to me, “Well, I just wish you were joining a Bible-based church.” In my mind, my thought was, “How much more Bible-based can you get?” She obviously did not understand the LDS Church!

After I was baptized and confirmed, we continued talking about religion, and she grew increasingly curious about what I believed and what Mormons believe. She attends a very progressive Christian church that is of no particular denomination and wanted to know why I had not joined her church — “Why the Mormon church?” she asked.

One day, we really got into the meat of the doctrine of the LDS Church. I explained, amazingly (thanks to the Holy Spirit running my mouth instead of just me), doctrine ranging from the Great Apostasy and the Restoration of the Gospel, to priesthood authority and baptism, to the gift of the Holy Ghost and baptisms for the dead, to the Prophet Joseph Smith and you name it.

Everything I had ever read or known — and even things I did not know well — we covered in that one discussion. Round and round we went, connecting the dots between different doctrinal principles and their Scripture references. At the end, she said, “Well, you’re not going to change my mind and I’m not going to change yours. It sounds like the Book of Mormon is just a study Bible. And I just wish there was more proof for the Book of Mormon.”

I was mentally exhausted at that point. She really gave me a spiritual workout. And that was what she concluded after all that?

I got out of the restaurant, bade her farewell until next week, and got in my truck.

I asked Heavenly Father if I did okay. I felt a sense of peace about the answers that had been given. I knew the Spirit had said most of it for me.

I got home and looked up a few Scripture references that I had given and discovered, to my relief, that they had been correct. I had done okay.

I did not, however, feel a sense of accomplishment or pride in having been right, but instead I felt a deep worry and a frustrating concern for my friend.

I have realized, though, that it is the work of the Holy Spirit, now, to work in her heart. It is not my job to convert anyone — mine is the job of expressing the message.

Editor’s note: After reading this experience, review What People Are Interested In. How could this conversation have gone differently with that principle at work? Share your thoughts in a comment below.

Ask For Help When Winds Of Prosperity Blow

Ask “Who is missing?”